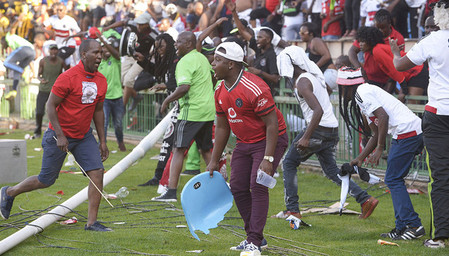 13 people were admitted to hospital following injuries sustained after clashes during the league game between Mamelodi Sundowns and Orlando Pirates played at Loftus Stadium on Saturday.

The violence erupted at the stadium with The Bucs finding themselves 6-0 down to the reigning league champions, with fans damaging property at the venue with just minutes left before full-time.

Despite the ugly scenes and amid rumours stating otherwise, no deaths have been reported.

PSL official Ronnie Schloss confirmed the number of fans taken to hospital, and condemned the behaviour witnessed at the match.