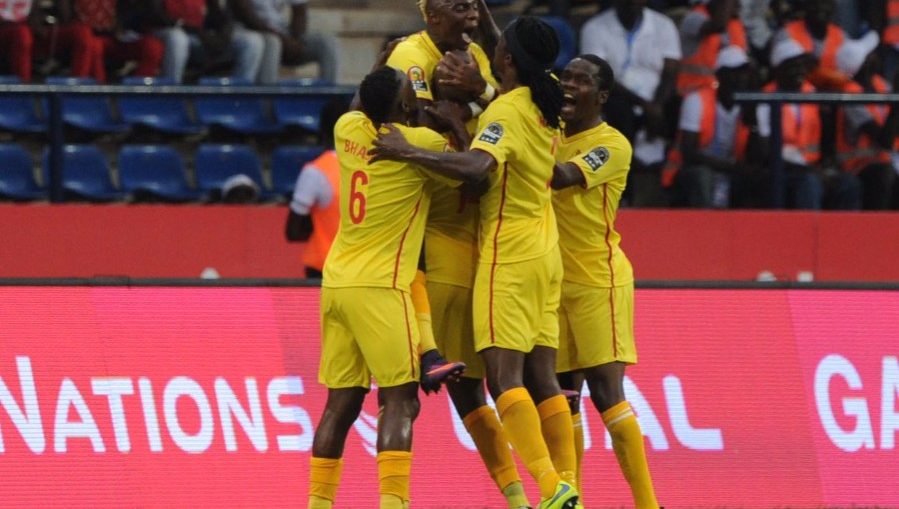 The Zimbabwe Warriors put up a fantastic performance against pre tournament favourites Algeria in a Group B Thriller in Franceville.

The Warriors dominated the exchanges despite conceding early from a brilliant finish by African Footballer of the year Riyad Mahrez.

Despite the early setback the Warriors recovered and levelled in style from a Kuda Mahachi angled short that deceived the Algerian goalkeeper Mbolhi midway in the first half for a deserved equalizer.

Prior to the equaliser, the Warriors suffered a setback when talisman Knowledge Musona limbed off the pitch clutching his hamstring. He was replaced by hard working Mathew Rusike who also put up a good shift.

The Mahachi goal ignited more fire into the Warriors engine. After the goal they grew in confidence and continued to trouble Algeria with pace and intricate pacing football which saw brilliant Khama Billiat dominating the midfield through his brilliant vision and dribbling skills on the run. Khama was later denied twice by the Algerian goalkeeper and the post from powering Zimbabwe in to the lead.

Considered the underdogs in the group, the Warriors proved everyone wrong when they took the lead via Nyasha Mushekwi after Onsimor Bhasera blatant foul in the box. The Chinese based striker coolly slotted the spot kick home by sending the goalkeeper the wrong way.  From then it was advantage Zimbabwe until the 82nd equaliser when the inform Riyad Mahrez beat Mukuruva with a hard and low short. The young goalkeeper could have done better with much anticipation. Mukuruva had a decent game despite some occasional nervous moments.

Sadly substitute Cuthbert Malajila missed a clear chance to put Zimbabwe 3-1 up just before the Mahrez equaliser. He worked hard to create space behind the Algerian defence but he failed to compose himself and finish off the Desert foxes. He shot straight at Mbolhi. This was a key moment in the game. Had Malajila converted, the Warriors could have sealed the game off and take all the three points.

After the game Warriors mentor Calisto Pasuwa was upbeat and happy with the result. He said “We could have won the game with a little more clinical finishing in front of goal. We setback too deep in the second half and invited unnecessary pressure.  A point against Algeria is still good motivation for the players ahead of our next game. Our objectives is still the same, to reach the second round and we will work towards this”

The Zifa President Dr Phillip Chiyangwa was also full of praise for the Warriors after the match. He said “I’m impressed with today’s performance and still very optimistic about our chances and I believe we can go further in the tournament and make the whole region proud”

Zimbabwe will now face Senegal in their next match on Thursday. The Taranga Lions beat Tunisia 2-0 in their opening game. They now top the group with three points. Musona will be a big miss for the Senegal game. However basing on today’s performance, the Warriors have nothing to fear. They fought like true Warriors and played with a lot courage and confidence. Khama Billiat looked a threat thorough the game and he will torment teams. His combination with Mushekwi and Mahachi prove too hot to handle for Algeria. Whatever happens on Thursday will be a story for another day. For today we can only say Well done our gallant Warriors! You made your country proud. The whole country is talking football from Zambezi to Limpopo. Your fans say THANK YOU GoWarriorsGO