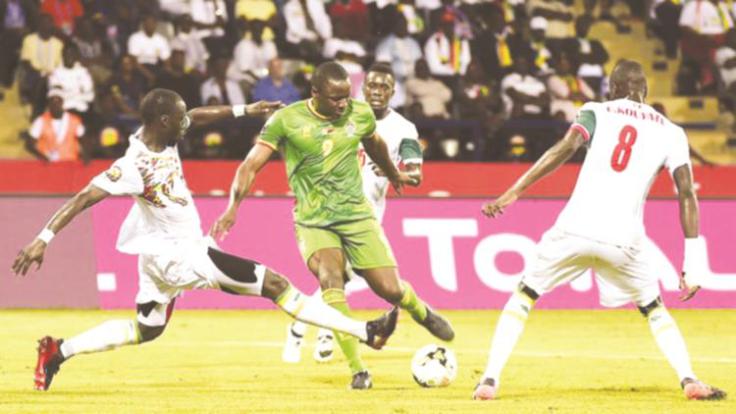 Zimbabwe 0
Senegal 2
The Zimbabwe Warriors succumbed to a painful 2 nil defeat against Senegal in a one sided affair match in Franceville. The result has meant that Senegal has become the first team to reach the 2017 Africa Cup of Nations quarter-finals in Gabon.

Mane tapped in the opener from close range in the ninth minute from Lazio forward Keita Balde Diao’s low cross. Henri Saivet, on loan at St Etienne from Newcastle, then struck home a brilliant 20 yard free-kick four minutes later.
Despite persistent domination from Senegal, the Warriors also had some chances to restore pride. Khama Billiat wasted a good chance for Zimbabwe just before half-time when he fired tamely at Abdoulaye Diallo. The keeper also produced a good block to keep out Nyasha Mushekwi’s drive. The later was also denied a clear penalty claim in the last quarter.

As it stands, The Lions of Teranga have a maximum of six points from two games in Group B. Tunisia are second with three points and both Algeria and Zimbabwe have a point each.

In order to qualify, Zimbabwe must beat Tunisia and hope that Senegal draw or win against Algeria.

It’s still very mathematically possible for the Warriors to reach the quarterfinals but they need to focus now on the Tunisia game.

After today’s defeat there was a lot of mixed feelings amongst Zimbabweans many went on social media to ventilate their feelings of both disappointment and encouragement.

“Tough luck Warriors we lost to a better team, now we have to throw the kitchen sink at Tunisia !!!!”

However (Hon) Professor Jonathan Moyo, (MP) Minister of High & Tertiary Education, Science and Technology Development was quick to lay his blame on Coach Pasuwa he commented on twitter saying;

“ A disaster but for Tatenda Mukuruva. When a national team at this level lose its formation & plays chibhubhubhu, it’s a coach’s problem!”

In the end it can be said, this was a true reality check for the Warriors; they played a very good team with world class players. They met a real test and they tested their medicine. Senegal out played them in all departments. They showed composure and a lot of quality especially in the first 20 minutes. After watching all the 4 teams in the group one has to be convinced that Algeria are the weakest link in the group, perhaps we Zimbabwe actually blow out chance by not collecting maximum points from them. Tunisia showed today that they mean business, they were all organised and can handled come back pressure perhaps much better than us against Algeria. They to some extent matched Senegal at par in their first game and like wise defeated Algeria 2-1 convincingly.
If we are not careful we could become the hunter hunted when we face them. It’s not a secret Pasuwa has to change his game plan going into to the Tunisia match them. I believe we need to be more combative in midfield, press, compress and make it difficulty for our opponents to find rhythm. We allowed Senegal too much possession and they monopolised the game and created numerous chances to our detriment. Had it not been of young Mukuruva’s heroic saves it could have been devour?

Our defence looked shaky and vulnerable. They gave away possession deep inviting trouble persistently especially in the first half. We tried to pass from the back when it looked clear that we were unsettled, even in midfield we kept on losing possession and composure. Our midfield failed to create meaningful chances bar from two half chance that came later in the game.

We definitely need a fresh start against Tunisia. The fact that we did not collapse and concede many goals against Senegal under server pressure is a blessing in defeat. Let’s built on this resilience and take no prisoners against Tunisia.
Our defence has to be tight, like the security at Chikurubi Maximum Prison, our midfield should be exiting like Jah Prezha’s songs and our strikers should be on fire like Rick Fire the BhoBhoman. After all we are the underdogs and have nothing to lose but only something to gain if we win, the pride of our nation Zimbabwe.