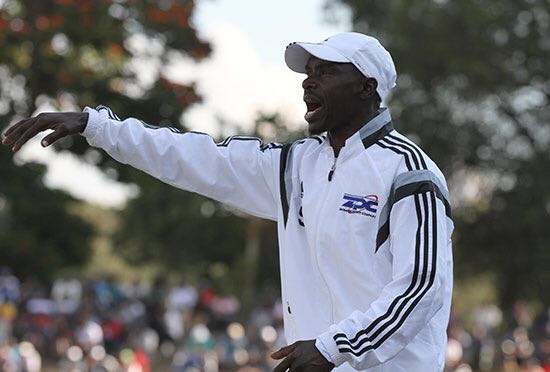 Posted in: Football sports
March 10, 2017
If they ever doubted him, then last Sunday, Saul Chaminuka made them believe.

He led the Young Warriors to a 2-0 win over Swaziland’s Sihlangu in a friendly international played at Somhlolo National Stadium on the 15th of October 2014, they might have doubted him but last Sunday was a make believe affair.
And if ever they thought the Warriors dominance over Sihlangu was a fluke, then Chaminuka’s prowess “to dig an elephant’s grave with teaspoons” as they called it after leading his MTN National First Division log leaders, Matsapha United to a “Goliath slaying” 2-1 win over Mbabane Swallows, the MTN Premier League of Swaziland champions elect in the SwaziBank Cup put matters to rest.
Swallows had last lost a match at the end of August 2016, stretching to one draw and 27 consecutive wins pocketing the Castle Super Challenge Cup, SMVAF Ingwenyama Cup and the MTN League title, and easing their way to the first round of the Caf Confederations Cup.

But Chaminuka and his lads would have none of that intimidation taking the bull by its horns winning so many hearts and praise including compliments from Madinda Ndlovu, Julius Chakupewa, Hebert Maruwa and Godfrey Tamirepi.

As if not enough, the former Warriors assistant coach was on national radio winning more hearts with his almost flawless SiSwati to which the host Mdockies Nathi Hlophe retorted “umceceshi lo wakwele Zimbabwe kepa seyasikhuluma SiSwati”. (This coach is from Zimbabwe but can now speak SiSwati).

After narrowly missing out on qualification for Caf Club competitions with ZPC Kariba in 2015, Chaminuka has since set targets for the African Safari with Matsapha United.

“Now I hope that we have beaten Swallows we have to go all the way. Now we have to look at how we are going to handle the smaller things as Matsapha United.

“I hope the players are not going to get too excited and we end up giving it away.
“After winning like this we are supposed to go all the way and play in Africa come next year. This is my dream this is why I came back to Matsapha United after Afcon,” said Chaminuka.

The former Warriors assistant coach was part of the Zimbabwe national team cast in Gabon and rested no day, connecting directly and arriving barely a day before the Hub Sundowns game.

“I can say that and anyone else can say that because we have done the impossible,” added Chaminuka.
The coach then described how he managed to bring down the leopard from the tree.

“When you are training and you know the strengths and weaknesses of your opponent, you tell your players and when they apply themselves well, you are bound to be happy.

“(Our game plan) was to make sure that they don’t play their passing game. I think we Succeeded in doing that and when we didn’t do that they scored immediately after we scored before we had even sat down from celebrating.

“Why? Because we went to sleep and immediately when we saw that we sent messages to shut them down hence the result,” said Chaminuka.
@NoelMunzabwa