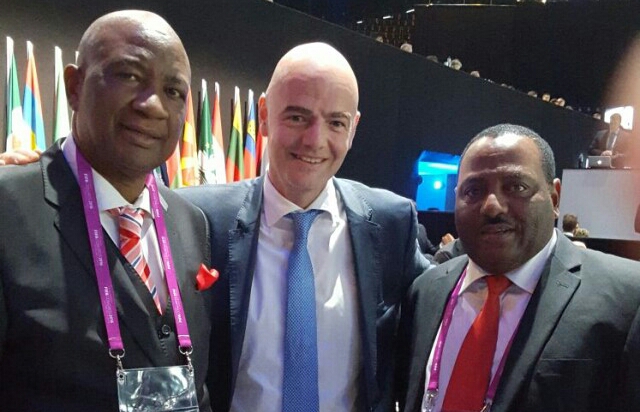 FIFA president Gianni Infantino landed at the Harare International airport at 6pm today bubbling with optimism that his visit will take world’s most popular sport a gear up.

He was met on arrival by his local host and Zifa president Philip Chiyangwa and officials from the Zimbabwe Tourism Authority and before being whisked away to his hotel took five minutes to address members of the media.

“My coming to Zimbabwe is another gathering of African officials because many are going to be here. These are rare things on the continent and the only time they happen is when people meet to compete.

“But while we compete, we must also take time to co-operate because both bring forth progress. They also give us an opportunity to look at the future of African football and where we are going.

“In South Africa this week we also touched on the development of our programmes with particular emphasis on Africa and this could not have come at a better time than when we had nations like Zimbabwe and Uganda doing well in the AFCON,” he said.

Turning to the recently meeting he held with 54 presidents of African football, the man at the helm of the sport described it as “very good, with one of the focus areas being the discussion of the next World Cup that begins in 2018.”

He said most of the deliberations held were endorsed. Also present at the convergence outside the continent were Germany, Slovakia and Canada.

What has made Infantino’s current mission to Africa critical  is the fact that it is the first time his office has convened an executive summit of such magnitude which also deals directly with all the leaders of African football.

The only time all association presidents gather together is for annual FIFA and CAF Congresses.

Infantino’s arrival has also set the tone for the battle for control of African football that pits long-serving Issa Hayatou of Cameroon and Ahmad of Madagascar who has the backing of Chiyangwa.