Reporter: Gilbert Munetsi
Visiting Fifa President Gianni Infantino has showered Zifa and COSAFA president, Phillip Chiyangwa with a lot of praise, saying he is inspired by the Zimbabwean’s energy, passion and vitality and has since taken some of his ideas for his own use.

Infantino, who jetted into the country as a special guest on the occasion of Chiyangwa’s 58th birthday celebrations (which event also doubled as a celebration for his election as COSAFA president) made the remarks in his keynote address at the Harare International Conference Centre on the stroke of midnight on Thursday, February 23.

“Manheru Zimbabwe (Good evening Zimbabwe),” he welcomed invited guest to a round of applause.

“I am here to celebrate a win that has come about as a result of bravery. There are more brave men in this room tonight,” he said in apparent reference to the tens of African football associations who had taken the bull by the horns to come to Harare despite a spirited discouragement by the current CAF president Isa Hayatou.

Chronicling how he first encountered his Zimbabwean subordinate, he said this happened while they were on a bus ride during a COSAFA meeting where the Swiss and football chief had gone to present his manifesto.

“We spoke at length about the love we both have for football and how we can change the sport and develop the game so much cherish. That, by the way was just before February 26, 2016 when I eventually landed the biggest and hottest football seat in the world.

“And to day the presence of all the African presidents is testimony to the greatness of the Man that Phillip is,” he said. 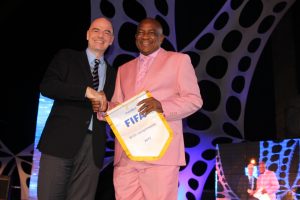 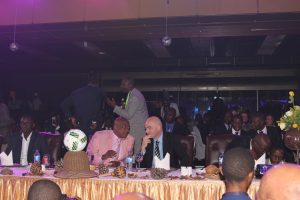